PART 10: EXPLAIN THIS INTERNET THING TO ME … IN ENGLISH

The Internet.   In it’s simplest explanation is  Internet is the biggest world-wide communication network of computers, where each computer can talk to each other making a huge NET.   But since you are asking the question, in English, that may not be what you are really looking for.   I suspect the real question is, why do I need the internet?

WHY YOU NEED THE INTERNET

In the history of the world, communication was the core of civilization growth. Starting from hand written messages that were transported over wide distances via boat, horseback or walking, the ability to exchange information, as fast as possible has always been the key to business and government management.

You have to be known, be found, be interesting, for a customer / client to exchange money with you for a service or product.   In days past, that advertising method was a pamphlet handed out.  Or a bill board on the street, as you were driving by. It presented it’s self in magazines and newspapers.  When the electronic age began, advertising communication expanded with it, in the form of  Radio, where an announcer would tell you about a business in exchange for who was footing the bill for your free entertainment.  That expanded to Television, were the communication became more visual and entertaining.    The point of all of it, was to be known of.  For listeners or viewers to find your business, your product, your service.

All of this communication is called advertising….the key to your success.

The internet is the next step in that evolution of “getting known”.  It is also became the great equalizer among business.  In the past, the cost of advertising was expensive and exclusive. A sufficient amount of money donated to an entertainment organization provided a focused audience, who was forced to hear the message.  Repeat that message enough, your name became the first business to pop into people’s heads when they need or want a product or service.  For example: 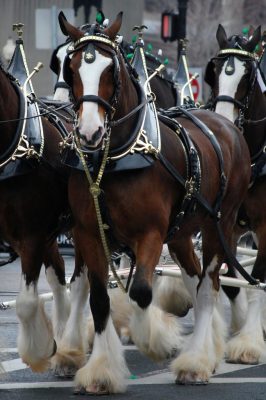 WHAT DO YOU THINK OF WHEN YOU SEE THIS PICTURE?

Based on years and years of exposure, most people are going to recognized that picture as representing this:

That is advertising at it’s best. Immediate association of image to a product.   The goal is same.  Your business has to get noticed and found, from people that are not in your immediate circle of influence. This is where the internet comes to life.

Unlike Radio and Television, the internet presents information to people based on a interest rather than entertainment qualities or local news agencies. People search for a service or product that they need.

Unlike Radio and Television, the internet presents information to people based on a interest rather than entertainment qualities or local news agencies.

Based exclusively on what they see and what appeals to them, is the difference between an opportunity to sell and them moving on to another product.   Or in the case of equestrian business…another trainer, tack store, vet or boarding facility.

THE INTERNET | THE GREAT EQUALIZER

The beauty of the internet, is that you don’t have to be a huge business with massive advertising budgets to be perceived as a prestigious and viable business.   All that really matters is how your present your information.  Those steps to presenting a great commercial aka Website is for a different article

There you have it, the Internet, In English… Is Advertising.  A method to getting known and found, by a world bigger than just your immediate clients.

The Internet, an Advertising method to getting known and found, by a world bigger than just your immediate clients.

How can Multimedia Designs, help you?

OTHER ARTICLES IN THE SERIES

PART 1: DON’T LET THE INTERNET BUCK YOU OFF
PART 2: MOAN, i NEED A WEBSITE! NOW WHAT?
PART 3:  GREAT! MY STUDENT OR WIX CAN DO THIS. (OR NOT)
PART 4:  BUT I DON’T WANT TO DEAL WITH GEEKS!!
PART 5:  BE HONEST, WHAT IS THIS GOING TO COSTS ME?
PART 6:  WALK ME THROUGH THIS
PART 7:  STRAIGHT DOWN THE CENTER LINE AND HALT.  (aka HOW NOT TO GET CHEATED)
PART 8:  ENTER THE COMPETITION.  LAUNCHING A SUCCESSFUL WEBSITE
PART 9:  WEBSITE LAUNCHED!  NOW WHAT?
PART 10: EXPLAIN THIS INTERNET THING TO ME … IN ENGLISH
PART 11:  I AM A VET, FARRIER, BARN MANAGER. WEBSITES? COME ON, THEY NEED ME!

How To Install Fonts PART 11:  I AM A VET, FARRIER, BARN MANAGER. WEBSITES? COME ON, THEY NEED ME!

MemberPress vs LearnDash vs Woocommerce Memberships vs Memberium